If you are the "HOME" team captain:

If you are the "AWAY" team:

LUG NHL22 EASHL Season IV will use the standard EASHL rules built-in by default in the game. No need to change any settings.

In order to connect with the correct opponent, both teams must ready up with the identical password set within their respective matchmaking settings. For every matchup, teams must input the password as THE FIRST 5 CHARACTERS OF THE HOME TEAM'S NAME. This will not include spaces or capitalization.

At the completion of a game, both Captains are responsible to complete a Post Game Report. Players must submit their scores for games to be scored and valid. The post game report is also used to rate/review your opponent so keep it friendly, LUG will not tolerate any offensive, abusive, or aggressive behaviour online.

We will be using the Official LUG Discord to keep track of scores for Season III. Make sure you have joined the LUG Discord, otherwise your scores will be omitted. The channels for score submission are called #nhl-xbox-scores and #nhl-ps-scores.

Scores should be completed upon the completion of EACH game, but we will accept scores until the end of the night. If your game has been rescheduled, just let us know when you submit the scores in the channel.

My team: [Your team name and abbreviation as indicated on the final score screenshot] 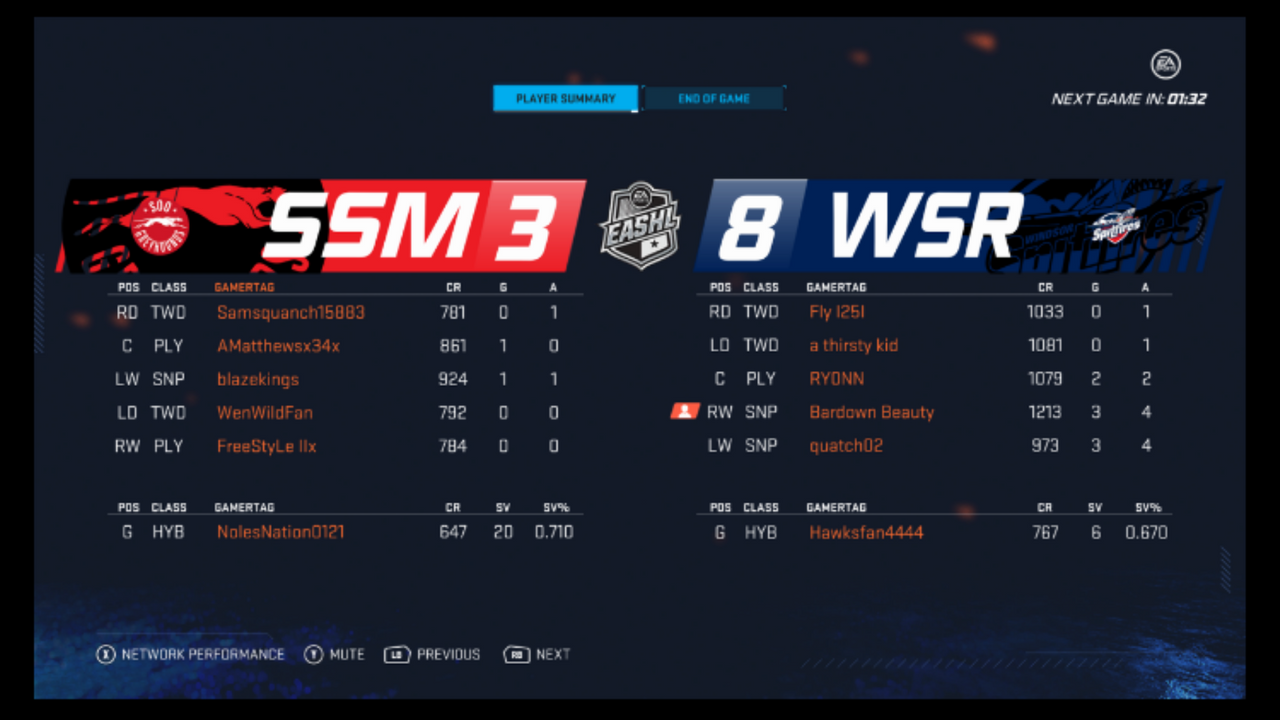 For the above Screenshot, the Score Submission would look like this:

We've set up Discord Channels for each Division to create a direct line of communication between Players and LUG eSports staff. If you have any issues during the game or connecting with you opponent, use the Discord links below to chat with LUG Staff.

Let's have some more fun with this! We'll be featuring some of the awesome PLUGs playing in the LUG NHL21 EASHL league on our Instagram. To win some of these awards, feel free to post a story tagging us to enter into these contests, and maybe win some extra prizes!

Make sure to check the Discord for updates on standings and schedule. Best of luck!

Q: WHAT HAPPENS IF THE GAME DISCONNECTS? (whole team and/or single player)

A: 1st Period: If a game disconnects during the 1st period, restart the game and let the clock run until the time that the previous game was disconnected. Complete the remainder of the game as normal (using the score from the original game as the starting point).

2nd & 3rd Period: If the game disconnects during the 2nd or 3rd period, players can coordinate a new time to play the game outside of scheduled game days. All rescheduled games must be completed before the next week's games start.

Q: WHAT IS THE MERCY/RAGE QUIT RULE?

A: If a team is down 5 goals at any point in the game, they can quit the game. If a player chooses to Mercy/Rage Quit, the game will be scored with an 8 goal differential. The Winning Team is responsible for submitting that score. Indicate the score shown on the player summary when submitting scores (ex: a forfeited win from a 7 - 2 game will be scored as 10 - 2).

Q: WHAT HAPPENS IF MY OPPONENT IS A NO-SHOW?

A: Teams have until the 5 minute mark to join their game (ie: 8:05, 8:35, 9:05). If a player does not show up by this time, it is considered a forfeit. However, players can reach out to their opponents to reschedule a game. If the game is rescheduled it must be reschedule for a time PRIOR to the original game time.

Forfeits are scored as a 5-0 win for the team that showed up. Please make sure to indicate that the game was a forfeit in the post-game report. We are expecting players to be honest and fair, so make sure you at least try to reach out to your opponent before the 5 minute mark before considering the game a forfeit.

Q: HOW DOES TIE-BREAKING WORK?

A: The default setting within the game is Continuous OT, so we are going to run with that. Please indicate on your post-game report that it was either an overtime win/loss. An overtime loss still yields a point for your stats.

Q: HOW LONG DO WE HAVE TO SUBMIT A SCORE REPORT?

A: Please try to submit your post game report after each scheduled game. This makes it much easier to track your scores. Your deadline to submit the post-game reports for round robin games is at 12PM EST on January 31st and all playoff games scores must be submitted before 11:59PM EST on January 31st. If you cannot submit the reports for any reason, let us know by emailing bgourley@lugsports.com

Need support? Contact us on the Discord Channel based on your division.